The protected bay area, of Nemo Reefs, has little to no current and good visibility. This shallow coral reef thus provides extremely favorable dive conditions, for first-timers. No wonder, it is also a popular choice for a Try or Discover Scuba Dive experience and also for confined water training. 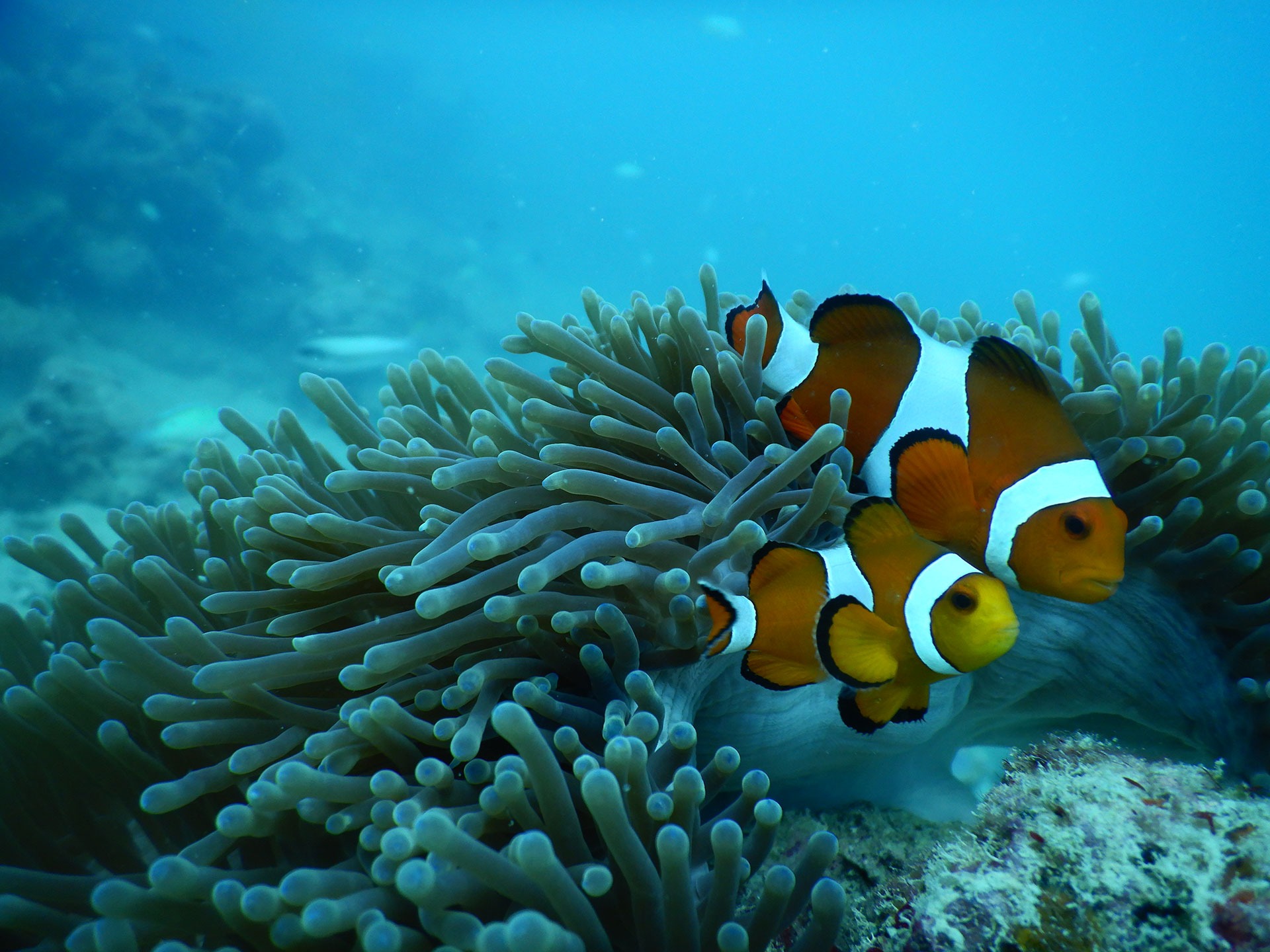 The reef plays host, to most of the common native reef fish like angelfish, anemonefish, parrotfish, damselfish and butterflyfish.

One also comes across pipe fish, sea cucumbers and schools of transparent shrimps. Nemo Reef is a bit of a nursery, for young scorpionfish, sweetlips, octopus, boxfish, crocodile fish and octopus.

South Button is north of Ritchie’s Archipelago. The western side, of this popular diving site, drops the length of a small wall down to 25 meters. It is home to barracuda, bigeye & blue fin trevally, surgeonfish, schooling snapper, angelfish and Napoleon wrasse. Other habitual inhabitants include batfish, crocodilefish, nudibranchs, moray eels, turtles and octopuses. Manta rays and devil rays are occasional visitors. So is the leopard shark.

Apart from scuba diving, it is also suitable for snorkelling.

The name tells a story. A small wall drops, from 10 meters down to 55 meters, gradually becoming smaller and merges into, the shipping channel between Havelock and Peel Island. The top of the wall has soft corals, of different hues such as purple, red and yellow.

The wall poses different challenges, to beginners and experienced divers.

With a change in tide, the current that flows over the wall attracts, a large variety of fish. Divers will discover scorpionfish, trevally, snappers, and Napolean wrasse. A very large Napolean wrasse called Pierre is amiable towards divers.

Other occupants of this enchanting site include pufferfish, lion fish, clams, octopuses, angelfish, stone fish and a variety nudibranchs. Beautiful nocturnal sea fans anchor themselves in mud or sand.

You can witness magnificent action, throughout the nighttime, during night dives. This is the time, when big barracudas, trevally and squids specially visit the site, to hunt for their dinner.

Kulh’s rays are seen with or without their tails, on the sandy parts. 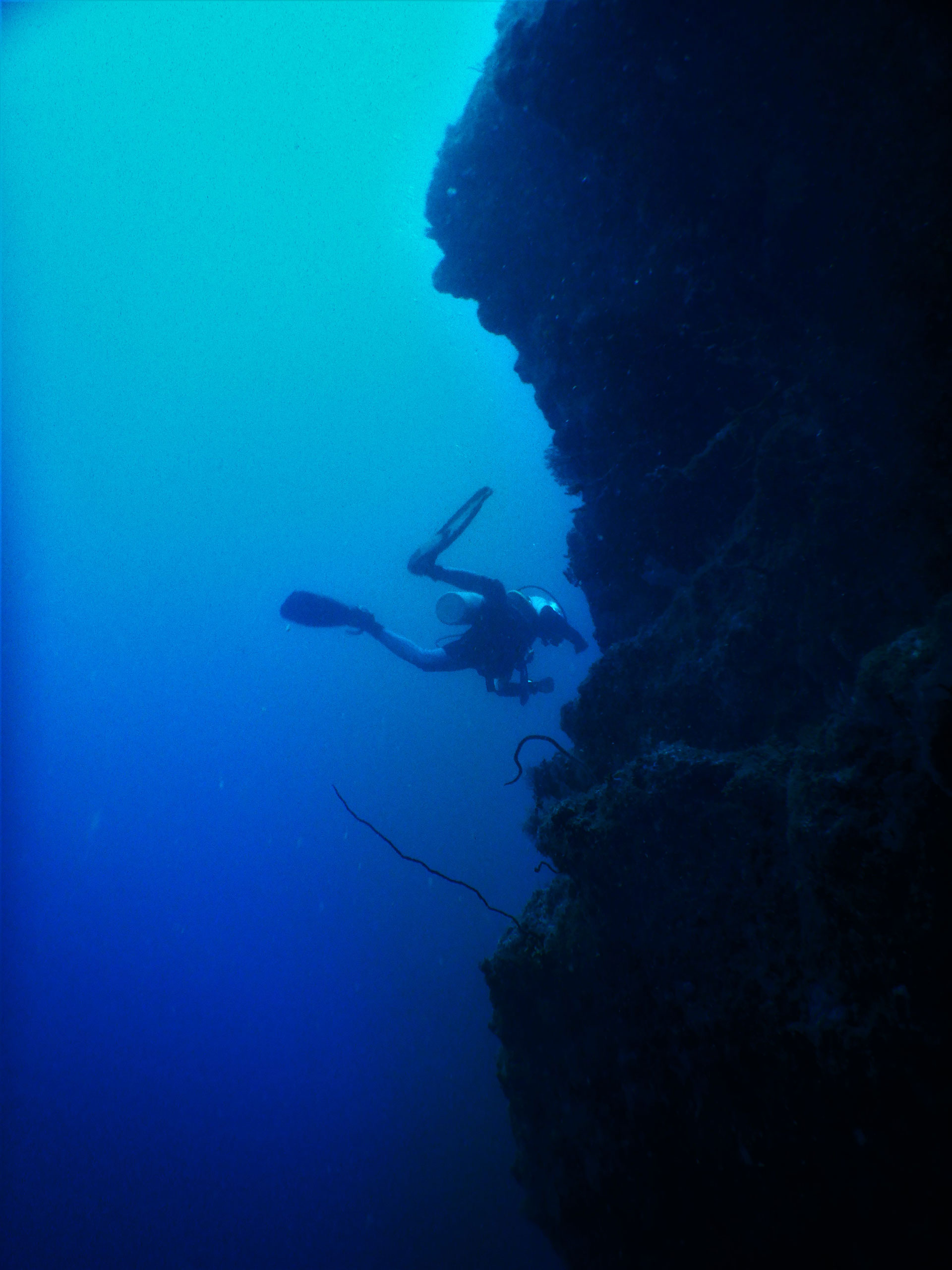 Three giant rock pinnacles, emerging from a dim bottom, make up the Dixon’s Pinnacle. The site is named after a local instructor, who discovered it.

Dixon is a happening place, as the site has an abundance of colorful marine life.

The top of the pinnacles are a hub of continuous frenetic activity, as it is a preferred cleaning station for giant groupers. Clouds of barracuda, sometimes 200 of them in one cloud, wait for their turn. White-tip reef sharks also visit Dixon’s Pinnacle, to use the cleaning service. 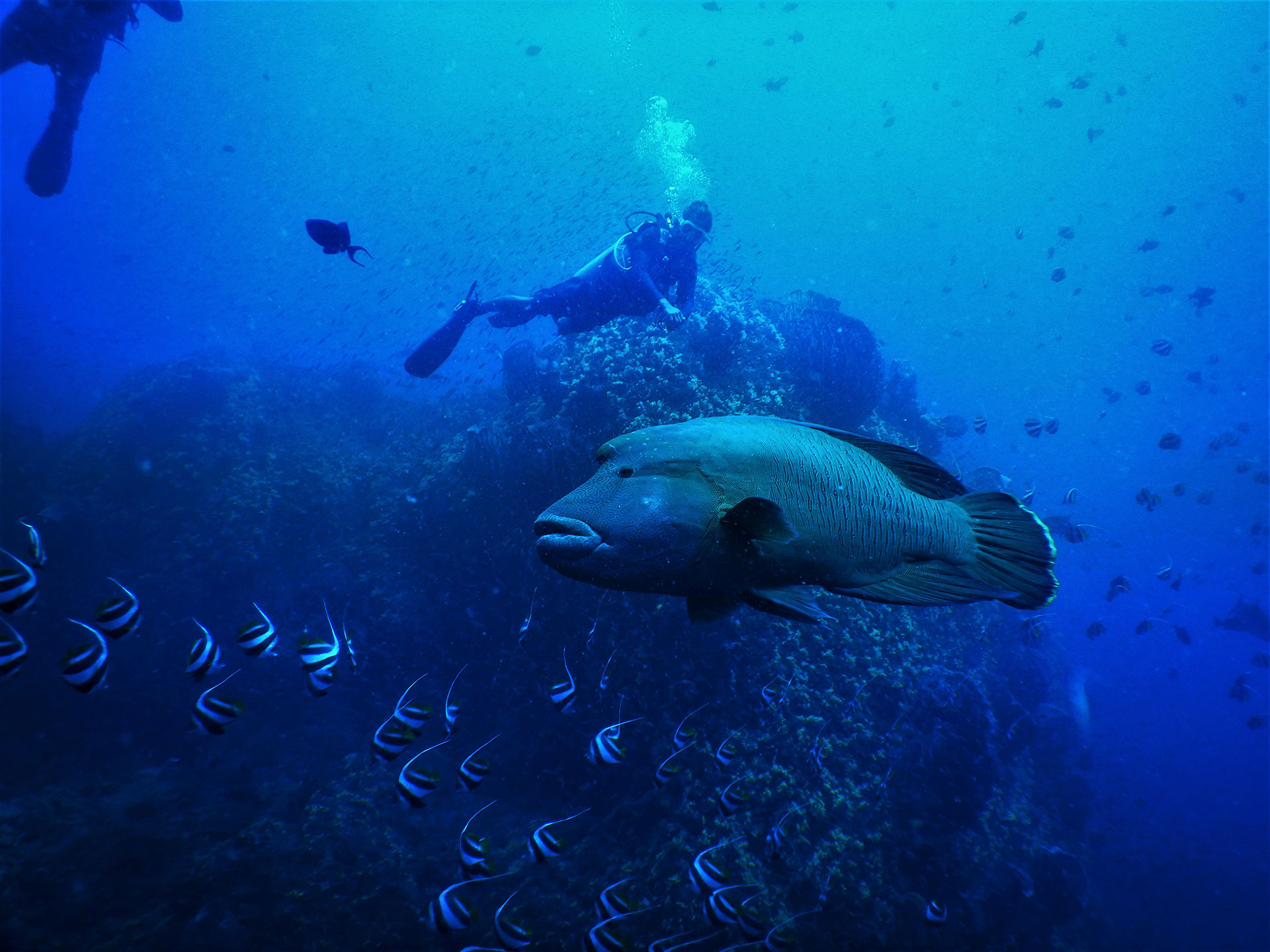 Large Napolean wrasse and titan triggerfish roam around for breakfast. Moray eels glide along, looking for a place to rest, while group of shrimps perform a dance. Huge tunas soar around like birds of prey, adding to the goings-on. Other inhabitants consist of green turtles, red-toothed triggerfish, manta ray, trevally ,lionfish, sting rays and batfish.

Big barrel sponges occupy the largest pinnacle, which is covered with glassfish.

One of the inhabitants, the juvenile emperor angelfish, with blue and white rings, is a favorite of photographers.

Dixon’s Pinnacle remains, one of the most preferred dive sites of explorers, Fun Divers and Underwater Photographers, as every dive offers some unique experience.

This site is named after Johnny, a local DIVE MASTER, who discovered it. Its topography consists of low lying rocky outcrops, at a depth of 30 meters. Gorgonians and multicolored soft corals dot the sea bed and cover the rocks.

Surrounded by sands on every direction, it is bustling with life and activity.

The rocks of Johnny’s Gorge are a safe refuge, for a variety of small angelfish, anemone and surgeonfish. 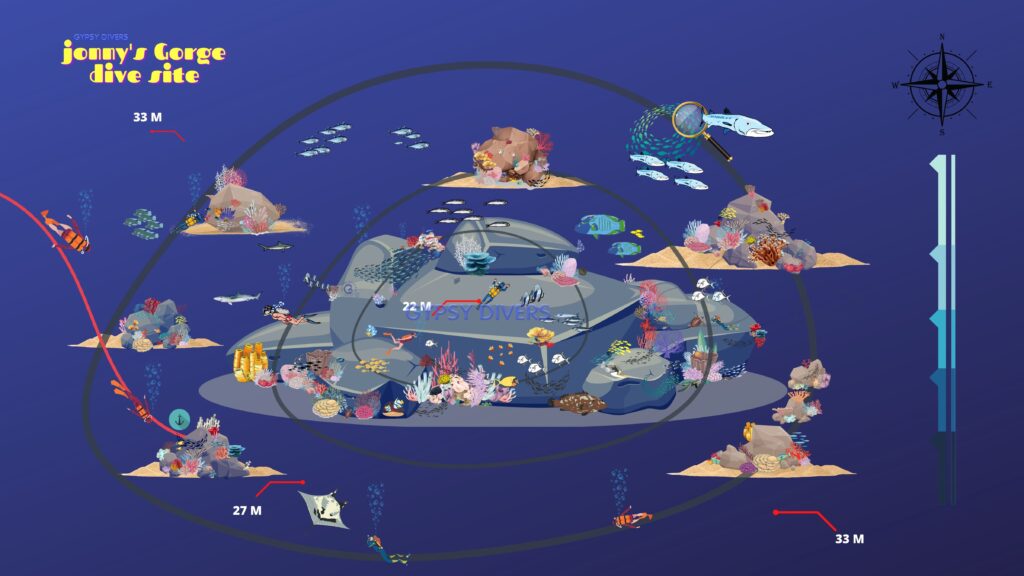 It is also populated by magnificent schools of mackerel, trevally, snapper, Andaman sweetlips, barracuda, and giant groupers. Others include tuna, queenfish and unicorn fish.

Curious batfish, who travel as a couple or in groups, come to watch divers. They usually keep company of divers for some time, before moving ahead.

Surprise! Friendly dolphins may greet you, as you surface for a break. So watch out for them.

If you swim along the sandy part surrounding the site and you may sight large pelagics like torpedo rays, eagle rays, sting rays, manta rays and reef shark.

Like Dixon’s Pinnacle, this site remains a favorite destination of explorers, Underwater Photographers and Fun Divers, for the distinctive experiences it has to offer.

This huge dive site is located, near a little white lighthouse, at the entrance of the channel , which leads to Havelock’s jetty. The reef gradually slopes from 1 meter, to the sand at 25 meters. It is suitable for any kind of dives.

It is also an ideal place for night dives. 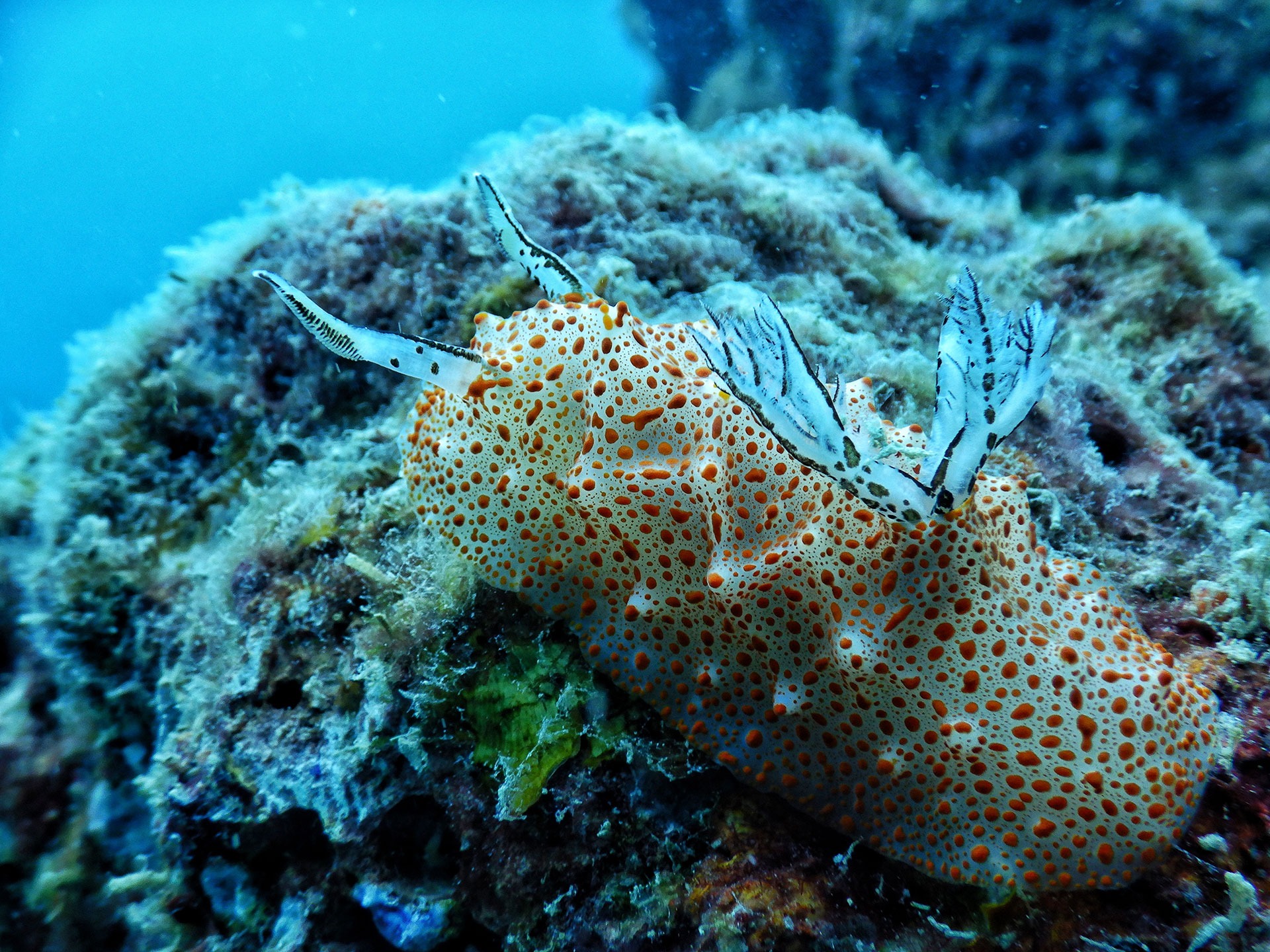 You will discover a stunning variety of soft and hard corals. Better coral and fish life can be found in the shallows. It has some interesting macro life too.

At Lighthouse, the common bannerfish is accompanied by angelfish, schooling fusiliers, lionfish, octopus and of course lobsters.

If it is your lucky day, you may come across a big group of humpback parrotfish.

Lighthouse is suitable for snorkeling too.

Regarded as a beginners dive site, Elephant Beach owes its name, to Havelock’s elephants taking a walk in the area. It is a popular reef, for dive training and snorkeling, as it is the only dive site accessible from the beach itself.

The site has a huge open sand area dotted, with rocks and multihued hard coral patches. The site abounds with macro life and is a treat for divers. You may come across the occasional sea-horse and fringe-lip flathead. Smaller macro life comprises a variety of shrimps, pipefish, and porcelain crabs. 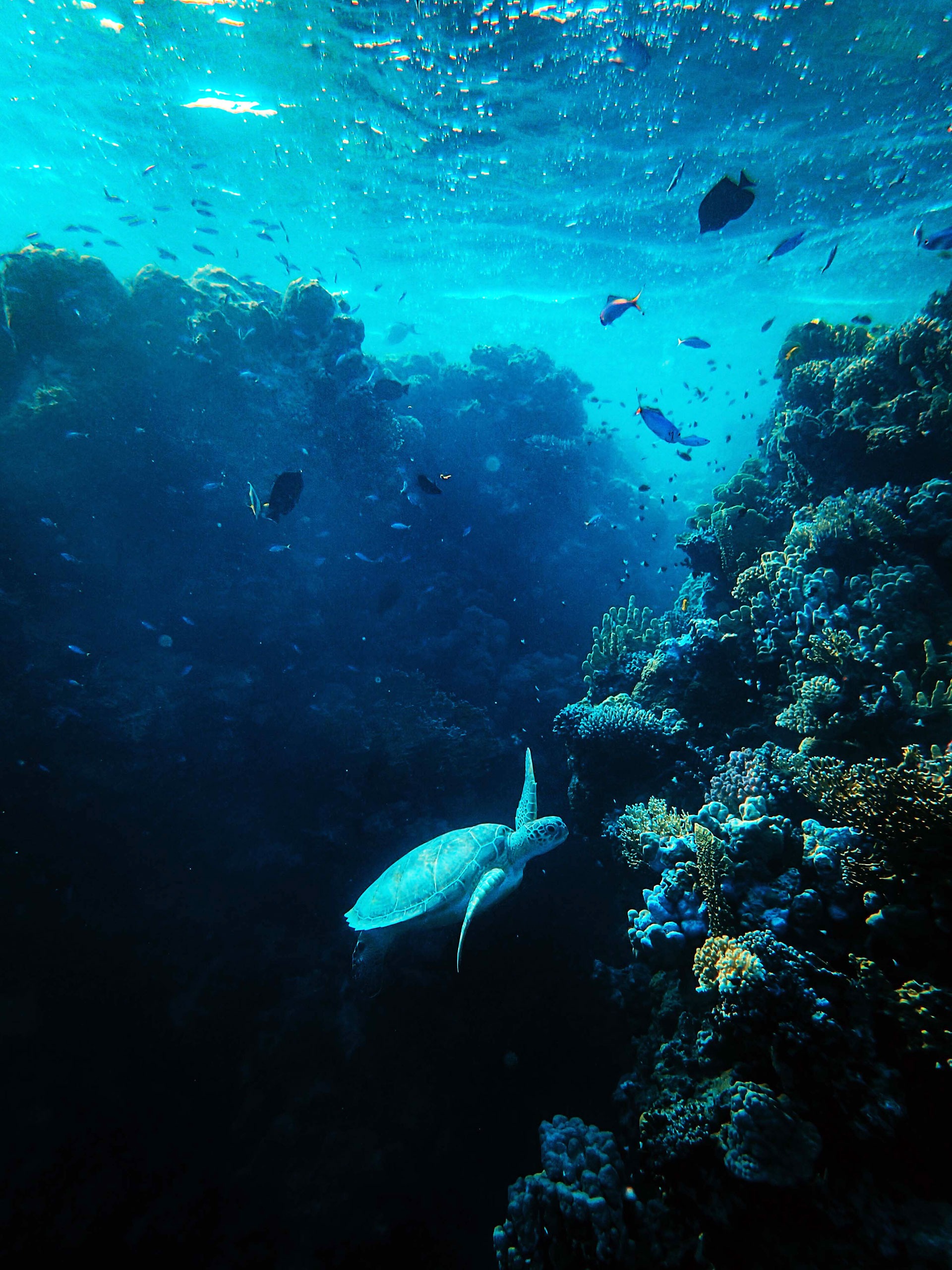 You may come across eagle rays and scorpionfish resting on the sand bed.

A small wooden cargo ship, MV Mars, which sank during a storm in April 2006, rests on the sandy bottom at about 15 meters. The boat is undamaged and tilts slightly towards the portside. The roof of the wheelhouse rises up to 7 meters. It is now a new home, to many variety of fish, who inhabit the reef just 10 meters away.

MV Mars is an easy dive for beginners, as it is a short dive around the wreck and reef.

Do you want to swim in the sparkling blue waters of a lagoon, along with an array of multicolored fish?

Then, Neil’s Cove is the dive site for you. You may come across large schools of blue stripped snappers and sting rays on the sand,while humpback parrotfish nibble away, at the hard coral.

This site, which is located northwest of Radha Nagar, gently slopes out to the sea, with the reef running from a beautiful cove.

The calm sea is perfect for snorkeling. However, one ought to be careful of salt water crocodiles and pay heed to official warnings. Swimming is therefore prohibited at dawn and dusk. 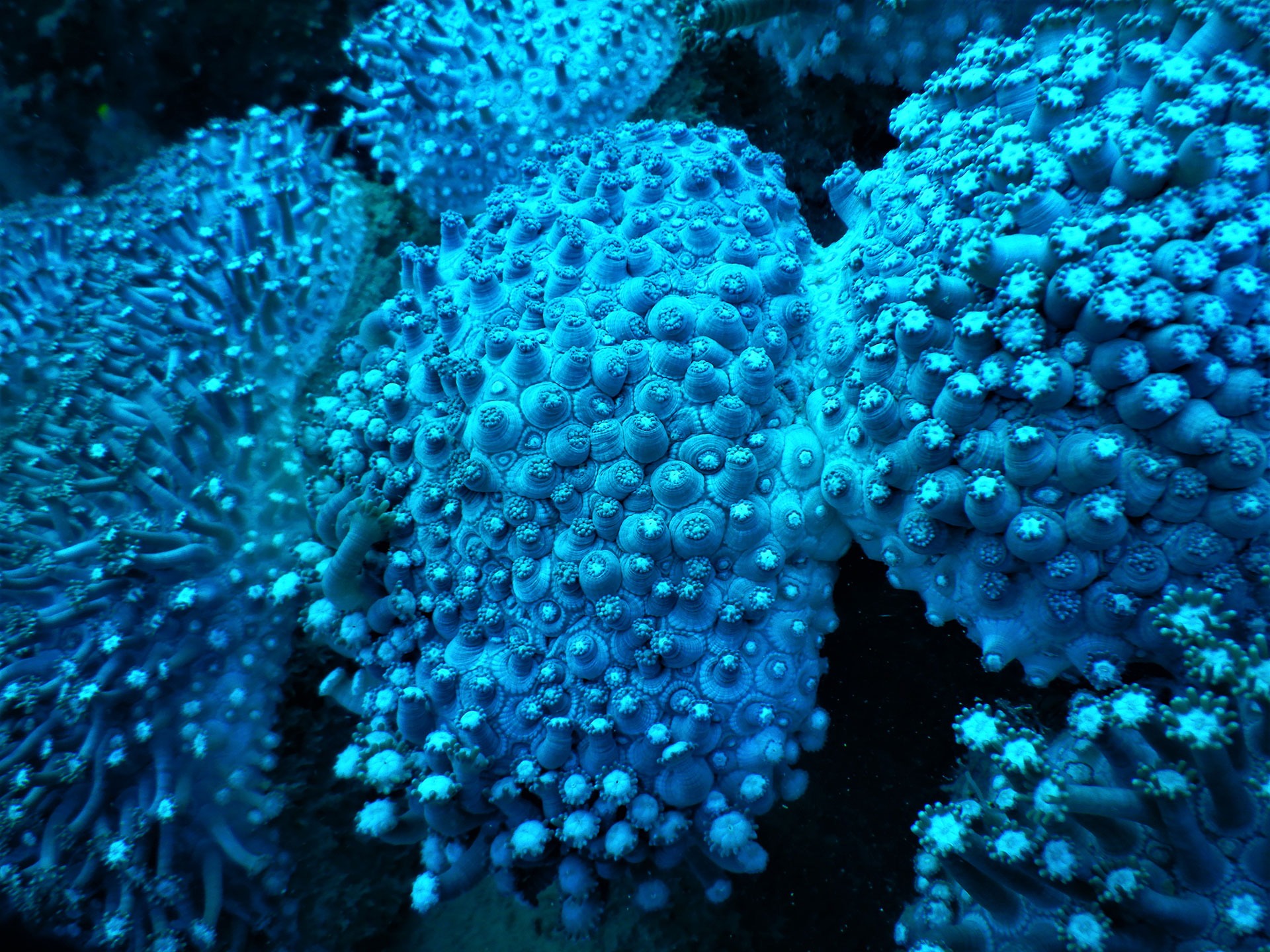 Minerva Ledge is a large shallow ledge, of rock and multihued coral, north –east of Havelock Island. It is difficult to explore it in a single dive, due to its vastness.

The expanse of the site provides a grand background, for display of a variety of corals and nearly every type of native reef fish. You will discover a colorful panorama composed of large schools of fusilier, unicornfish, snappers, surgeonfish, barracuda and trevally. The infrequent moray eel and giant groupers seek shelter under rocky outcrops. Towards the east, Minerva Ledge tapers down into deeper waters.

This area is visited by pelagic such as sting rays, tuna and barracuda. You may come across a Napolean wrasse, whitetip shark or eagle rays. 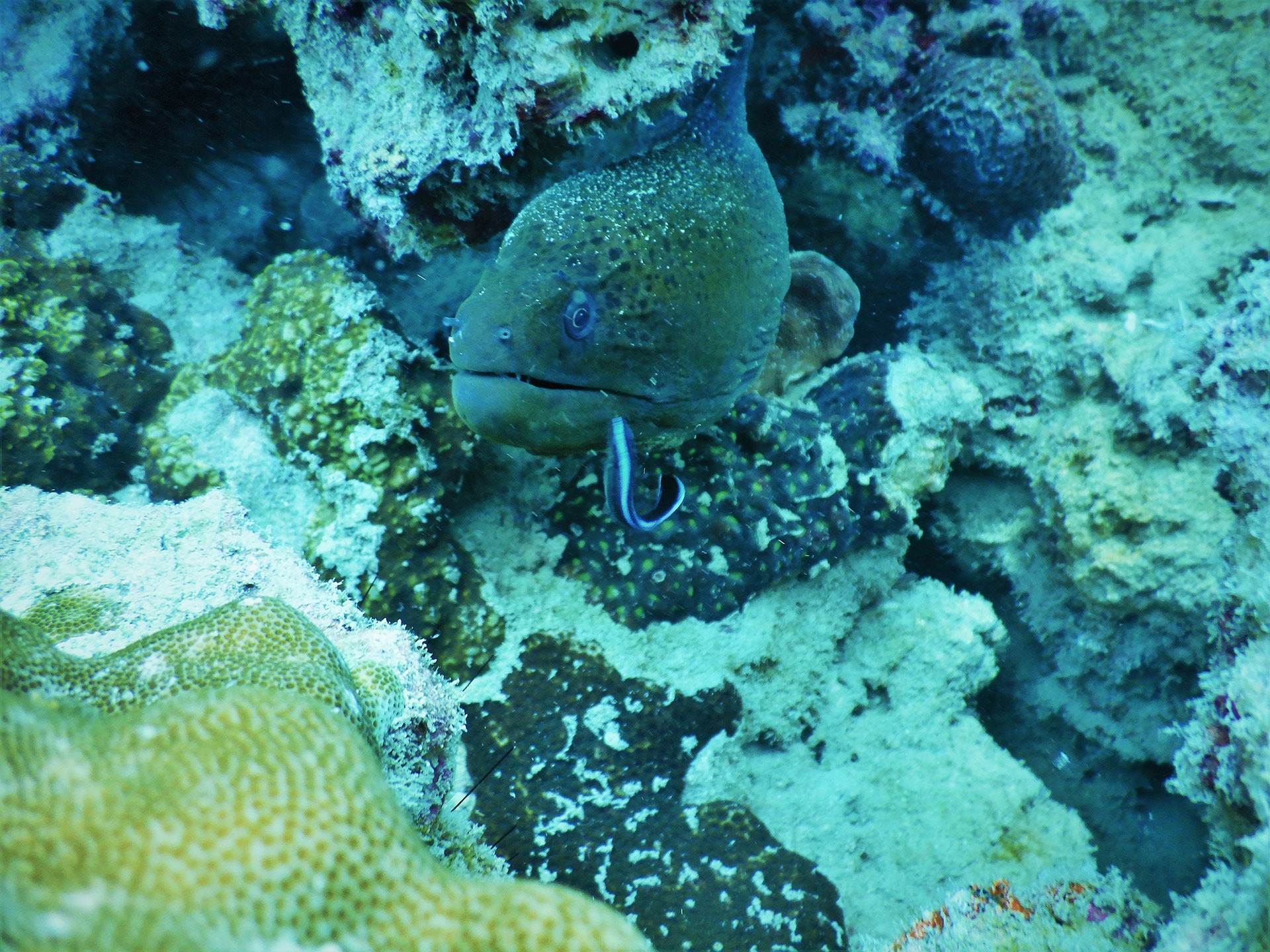 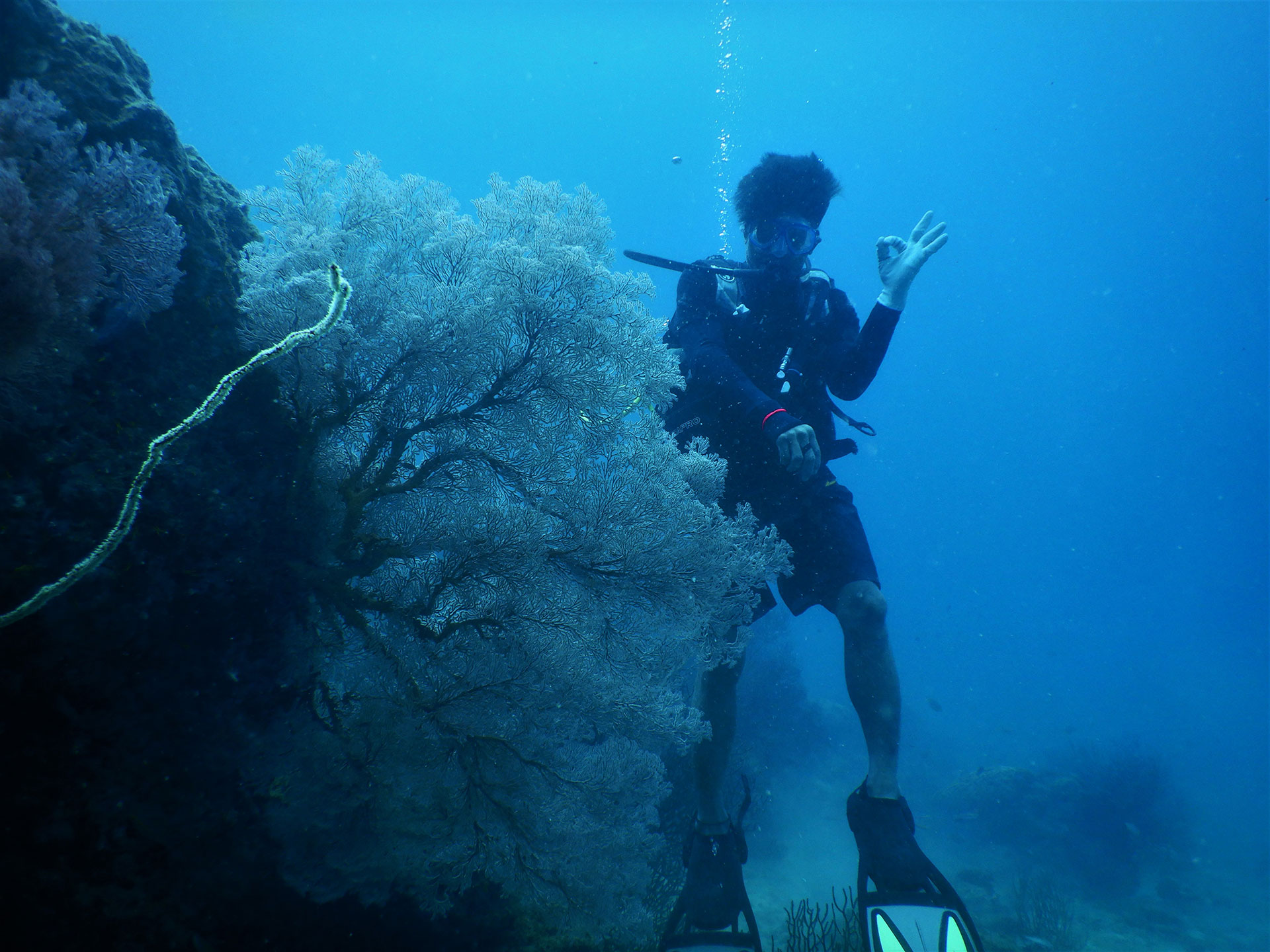 Pilot Reef is situated close to the entrance, of the shipping channel, north-east of Havelock.

This site can be described as a large flat reef, with a diverse coral life such as Brain coral, gorgonians, table coral, staghorn and whip coral.

It is a sight to stimulate the senses.

The corals and rocks are home, to a variety of bannerfish, butterfly fish and angelfish. Giving them company are fuslier, surgeonfish and small clusters of anemone. 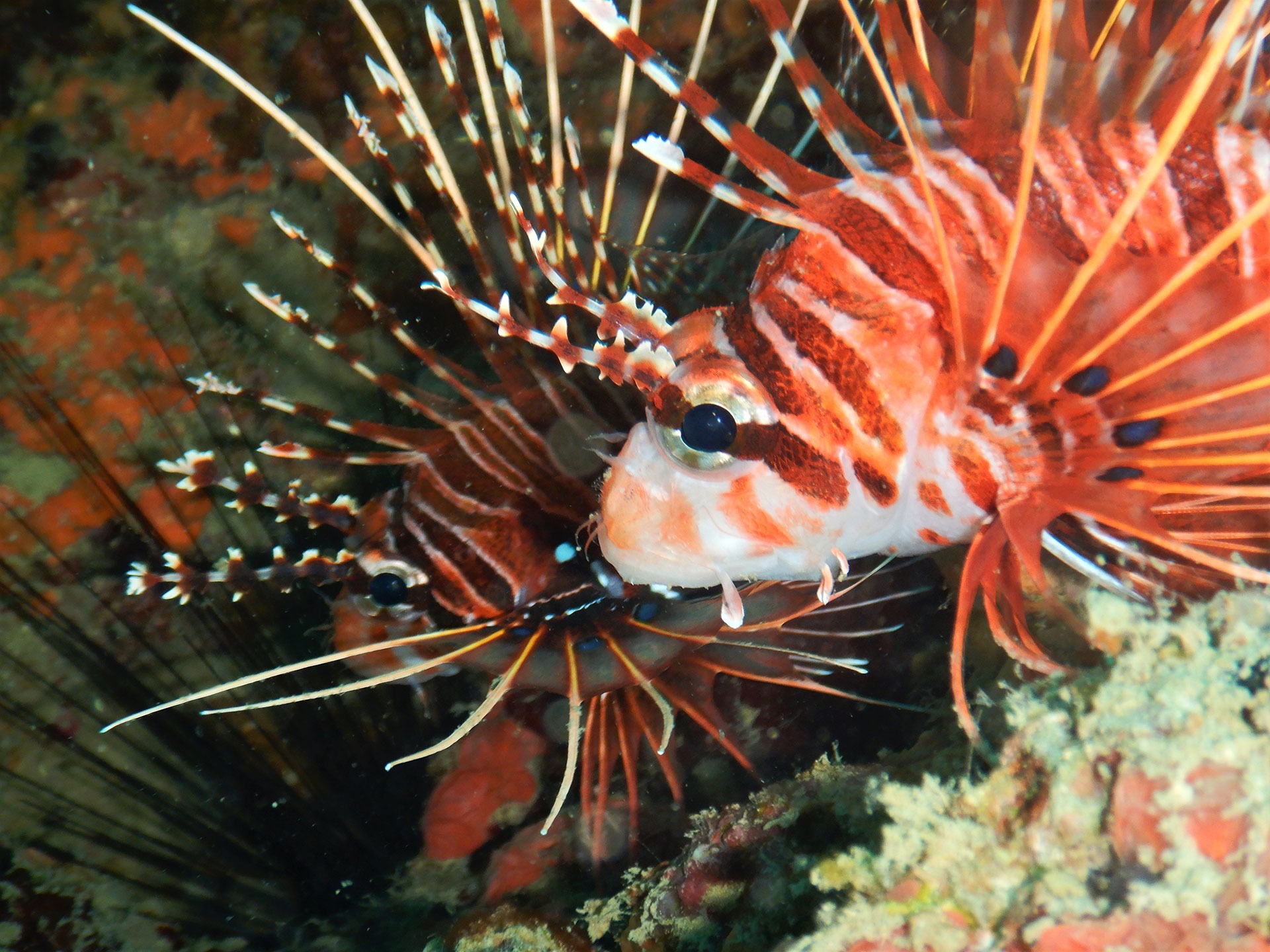 This site is a recent find. It was discovered in 2010. Its relatively low depths and sheltered conditions make it, a favorite of divers, with different experience levels. It is made up of low-lying rocky outcrops, which emerge from the bottom, at about 24 meters and resemble a broken ledge.

The ledge is surrounded by sand. The site and its surroundings are inhabited, by an abundant variety of reef fish. Some of them being Moorish idols, lionfish, Napoleon wrasse and shoals of snappers.

Turtles, schooling longfin bannerfish and marbled groupers are the other in-house residents.

Jackson’s Bar is a horizontal rocky reef, in the form of a shelf. It slopes down towards the sandy area, from 20 meters and reaches 30 meters, to meet the bottom. A large strip of rock protrudes from the bottom. The site is host, to a variety of spectacular soft corals and plentiful barrel sponges. 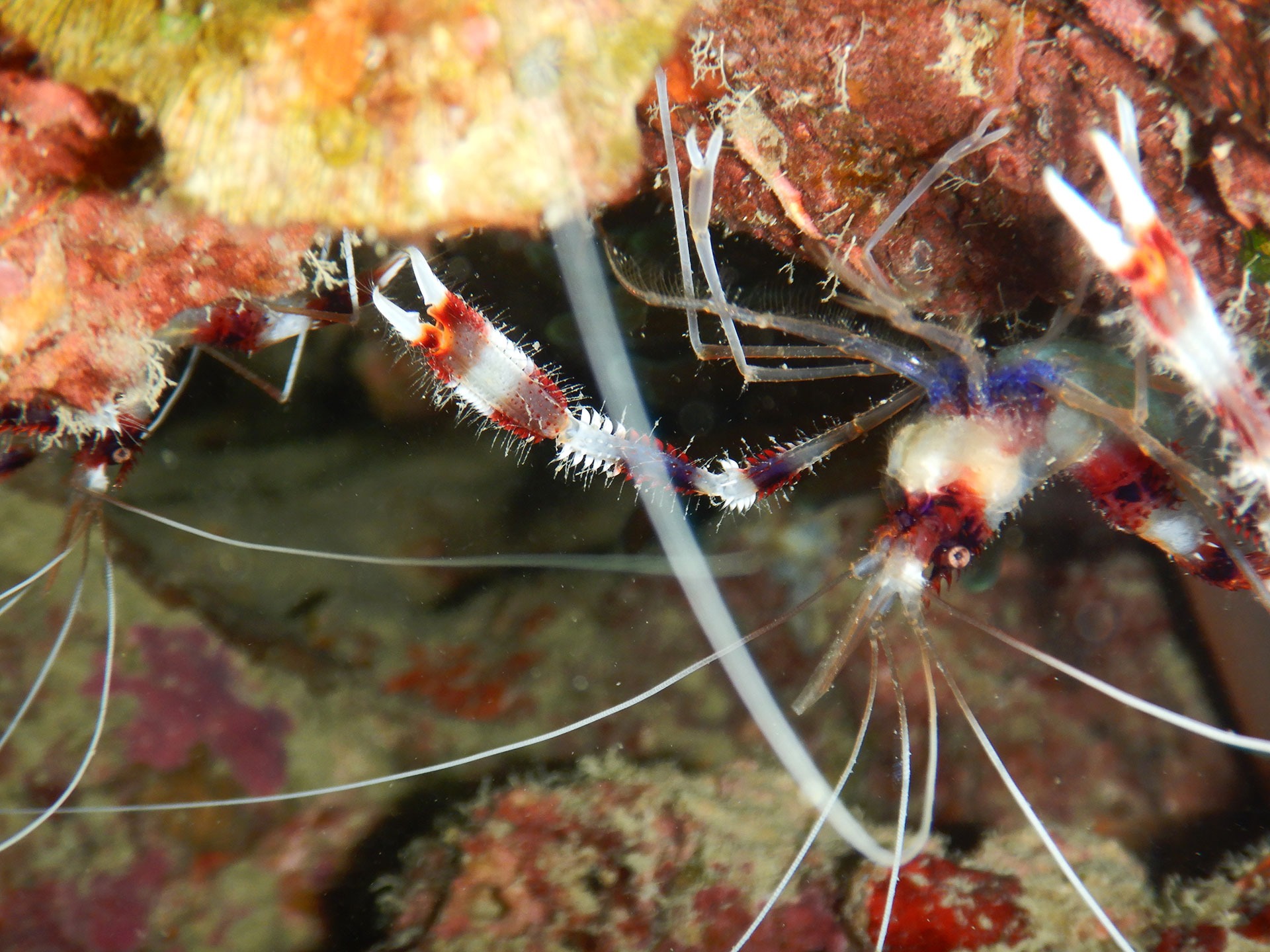 This site was discovered by Jackson, the brother of the legendary Johnny, after whom Johnny’s Gorge is named. The position of the site and the strong currents that flow over it attract, most of the large pelagic fish populating the area.

You will be greeted by schools of Bengal snappers, Andaman sweetlips, tuna and barracuda, on nearly all the days. Eagle rays, sting rays and sharks frequently visit Jackson’s Bar, to avail of the cleaning services offered by the smaller fish.

Large potato groupers can be sighted closer to the bottom. The over-hangs and crevices shelter banded sea kraits and Java eels.

Barren Island is an active volcano. Despite its remote location, it is a top scuba diving destination, due to the crystal clear visibility, colorful reef fish and the presence of large pelagic such as giant barracudas, dogtooth tunas and manta rays.

It has an underwater setting of black sand. The topography of past lava flows and proliferating colorful coral gardens add to the appeal